Encompassing 3,300 square miles of South-Central Oklahoma, the South-Central Oklahoma Oil Province (SCOOP) Play expands mineral rights interests into four unique counties, including Stephens, Carter, Grady, and Garvin. Although most resource plays in Oklahoma have provided primarily natural gas, increased exploration and new production methods have led to a rise in condensates and oil. As the SCOOP continues to expand and be developed, more producers continue to offer impressive estimates for mineral rights owners in the area.

It wasn’t until around 2013 that exploration efforts outside of the liquids-rich Cana Woodford shale play began. During this infancy period, the area had already produced impressive results from early production efforts. The SCOOP play now continues to rise in prominence as more large oil and gas exploration companies look to stake their own claims in the area. This has led to the generation of very competitive bids for mineral rights owners across the defined SCOOP area. 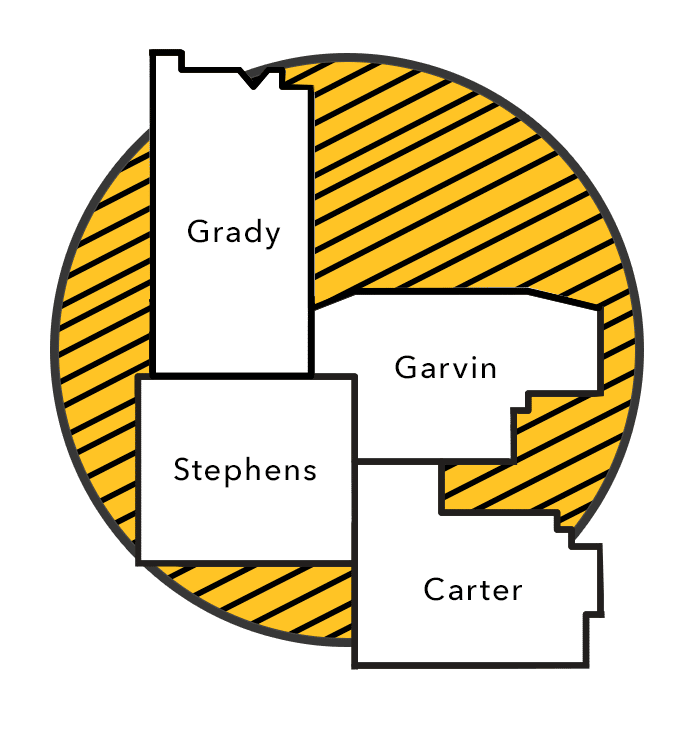 What SCOOP Reservoirs are Most Productive?

Initially created at statehood, Stephens County was named after the Texas politician John Hall Stephens. In this area, drilling for oil and gas first began around 1910; however, production didn’t begin until 1918. With this growth, Erle P. Halliburton founded the Duncan-based Halliburton Oil Well Cementing Company, which has now grown to include headquarters in Houston, Texas, and Dubai.

As part of the Texoma region and the Ardmore Micropolitan Statistical Area, Carter County didn’t have oil and gas production until the start of the 20th century. In 1913, the Healdton field was opened and ultimately made Ardmore a significant center for oil production; however, a large fire occurred in 1915 that required the city to rebound and recover before production could resume.

As an extension of the OKC Metropolitan Statistical Area, Grady County was developed from land given to the Choctaw through the Treat of Dancing Rabbit Creek. In October 2021, Grady Country was named the top county in the state for a barrel of oil equivalent (BOE). This success has made the county the most favorable within the SCOOP Play for many companies.

Garvin County wasn’t created until 1907, the day after Oklahoma was given statehood. It wasn’t until the 1920s that oil was discovered in the southwestern part of the county in an area named Robberson Field. The Golden Trend pool, spanning from the northwest to the county’s southern regions, wasn’t developed until much later.

What Is Your Mineral Portfolio?

If you are located in or around the SCOOP play and want to determine your mineral portfolio before selling your mineral rights, the team at BCF Minerals is here to help. We strategically pinpoint mineral interests in both emerging and mature plays to help families get the compensation they deserve for their mineral rights. Call our office today to get started and secure financial freedom for your family.

To submit more information, Please go to the Request An Offer page.